Often, when adults talk to children about racism, we only talk about the words and actions of individual people. It can be easy for kids to get the false impression that racism is just something “mean people” do. No matter what age children are, caregivers and educators can help them understand that racism is also about systemic injustice. Below, I share nine examples of systemic racism that children can understand.

Before I share the examples, let me offer some ideas on how to sprinkle talk about systemic racism into your conversations with children:

1) Especially with elementary age children and older, have the news on from time to time when they’re within earshot. If your child is likely to be upset by images from TV news, listening to NPR on the radio while you’re eating breakfast or preparing dinner is a good alternative.

From time to time, you can initiate conversations about news items and how they reflect systemic racism. Your child may also start to ask you questions about what they’re overhearing.

2) Read books together that show institutional racism from both the past and the present. I mention a few books below, and you can find a full list of books here that are ideal for sparking conversations about systemic racism.

3) Take advantage of kid-friendly workshops. I’m offering family workshops on systemic racism for parents and children to take together in February.

Learn more about the “What can I do about racism?” workshop for kids ages 7 – 11 and their grownups

Other sources for online workshops include Wee the People Boston and Outschool.

Disclosure: For your convenience, this post includes affiliate links. If you purchase items through these links, I may earn a small commission at no additional cost to you. You can read my full disclosure policy here.

1. How few children’s books are written by authors of color

This example is best brought home to kids by looking at actual books. The next time you’re at a bookstore or the library, randomly pick a number of books off one shelf and try to figure out the race of the authors by using book jacket photos and/or internet searches. Even many books that star Black kids and other children of color are written by white authors.

Wonder together about why this might be. (Hint: it has more to do with being able to get published than anything else!)

You can also talk about this graphic created by Sarah Park Dahlen and David Huyck. How are the various children pictured here feeling, and why?

Related Post: 5 types of anti-bias children’s books that belong on your shelves

Over the past few years, many school districts have made the news for banning Black hairstyles as “inappropriate.” This Georgia elementary school even posted photographs of Black children with box braids and fades on the school wall and labelled them as inappropriate.

Children who aren’t Black may need help understanding that many of these hairstyles allow people to way their hair naturally, without having to use harsh chemicals. Hairstyles are also an important part of expressing cultural pride.

As you talk about the systemic racism taking place with these dress codes, ask kids “who do you think it deciding what is ‘appropriate’? Whose culture is being used to make these decisions?”

3. How there are many more white teachers in public schools than white students

In A Kids Book About Systemic Racism, author Jordan Thierry, who is Black, tells kids that he didn’t have a Black teacher until he went to college. His experience isn’t unique.

Talk about how it might feel to never have a teacher who looks like you or understands your culture. Could it affect how you felt about going to school?

In her memoir I’m Still Here: Black Dignity in a World Made for Whiteness (highly recommended for adults!) Austin Channing Brown shares the story of how she got her name. At age seven, Austin wanted to know why her parents gave her a name that people often didn’t think was REALLY her name.

After many questions, her mother admitted that part of the appeal of the name Austin was that it’s often a white boy’s name. “We knew that anyone who saw it before meeting you would assume you are a white man. One day you will have to apply for jobs. We just wanted to make sure you could make it to the interview.”

A research study in the early 2000s brought this point home by assigning identical resumes with white sounding and Black sounding names. Researchers Marianne Bertrand and Sendhil Mullainathan found that job applicants with white names needed to send out about 10 resumes to get 1 callback from a potential employer, while applicants with Black names had to send out 15 resumes to get 1 callback.

5. How common housing discrimination still is even though it’s against the law

Passing anti-discrimination laws is an important way to fight systemic racism. But often because of the way these laws are written, or the lack of resources governments offer to enforce these laws, keeps a problem in place.

Housing discrimination – when a landlord refuses to rent to a person because of their race, disability, or family type – is still common.

The children’s book The Fair Housing Five and the Haunted House provides a great introduction to the problem.

6. How history is usually taught from a white perspective in schools

Systemic racism has had an immeasurable impact on U.S. history. Yet the way children are taught history also often reflects racist ideas by centering white people and providing whitewashed accounts of their actions.

For example, children often learn little to nothing about the thousands of years of history of indigenous people in what we now know as North America. Why do children only learn about Native Americans once Europeans have arrived? When describing encounters between indigenous people and Europeans, whose perspective are history texts using? Are the accounts accurate, or do they erase acts of racism committed by white people? Do they describe indigenous and people of color in stereotypical ways?

First grade teacher Bret Turner asks students whenever they read a text “whose story is being told here?” This helps children build the critical skills that help them recognize – and speak up – when white people’s stories and perspectives are being overrepresented.

In This Book Is Anti-Racist, author Tiffany Jewell helps tweens and teens make connections between history and racism, as well as how people of color throughout history have protested and disrupted racism.

7. The ways systemic racism shows up in the health care system

A 2016 study found that half of white medical students and residents surveyed believed at least one racist idea about Black people’s bodies. These myths included that Black patients have less sensitive nerve endings than white patients and that Black skin is thicker than white skin.

The result is that Black patients often don’t receive adequate pain medication when in the hospital. Other white doctors ignore or downplay Black patients’ complaints about symptoms that show something is seriously wrong.

Dr. Susan Moore, a Black doctor who recently died of COVID-19, made headlines with her heart-breaking story. Shortly before her death, she recorded videos complaining that her white doctor didn’t believe her complaints about shortness of breath. When she asked for pain medication, the doctor “treated me like a drug addict,” Moore said.

8. The passage of “show me your papers” laws that racially profile Latinx people

In 2010, Arizona legislators passed SB 1070, which racial justice activists refer to as the “show me your papers” law. It required state law enforcement to make people they suspected of being undocumented prove they were legally in the U.S.

While some of the law was later struck down, some portions are still in effect. Activists have criticized law enforcement throughout Arizona for racially profiling Latinx people during traffic stops. One analysis in Phoenix found that over 60% of the people who police contacted ICE about turned out to be in the U.S. legally.

We can ask kids what kinds of “clues” they think law enforcement is using to question if someone is undocumented. How does racism affect their ideas?

Related Post: Talking about racial injustice with my 6 year old

9. The police presence in Washington DC during the Black Lives Matter uprising versus the riot by white Trump supporters

When we make this comparison for kids, we need to set context first. Otherwise, children may think that we’re saying that protesting police brutality is similar to violently trying to overthrow the government.

Talk about the reasons that Black Lives Matter activists protested this summer, as well as their peaceful methods. Compare the true stories of police brutality that sparked these protests with the false stories about election fraud that prompted the pro-Trump riot.

Woke Kindergarten created this short video with contrasting images for how police treated both groups. (Adults should be aware that one image shows law enforcement pointing a gun at a Black person with a child perched on their shoulders.)

Jennifer Bradley of Beyond the Stoplight suggests asking children two questions as they look at images. What do you notice? What do you wonder? Find many more tips and resources from Bradley and others on discussing the riots with kids here. 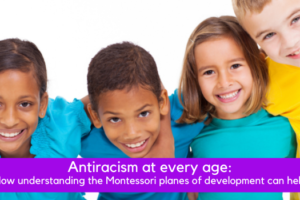 Antiracism at every age: the Montessori planes of development

My child has been educated using the Montessori method for[...] 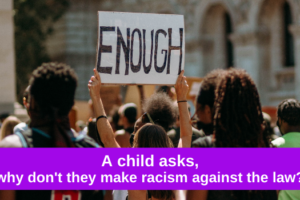 Answering a child’s question about why racism persists 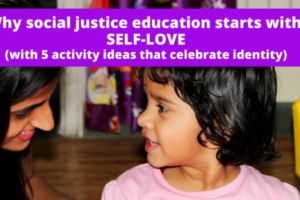 When educating children for social justice, it’s crucial to begin[...]

Grab my printable list of top diverse books for every age, from 2 - 12

Plus, discover which "classic" books I don't recommend because of racist content.

Get 5 conversation starters for preschool, elementary, and middle school age kids that work better than saying "we're all equal."